Coming from Ho Chi Minh City, we already had our dose of octan – probably for the rest of year. And coming from Chau Doc, the last town in Vietnam before the boat ride, we definitely had our dose of being hassled by taxi drivers and other service men.

So when we arrived in Phnom Penh, we were still in mood of just ignoring everyone offering anything to us – whether it was a tuk-tuk, a taxi or a drink of some sort.

… only to realize within about 15min of arriving: Cambodian hasseling is different. They do shout “tuk-tuk, Madam?!” a lot, so whenever you leave your hotel, a restaurant or any sightseeing point, they are waiting for you. However, they are thoroughly nice. If you say no, they will smile, bow their head and leave you alone.  Our very first tuk-tuk driver took us from the bus station to our hotel – and only then did we realize that we did not have any Cambodian currency or even US dollars (the next best thing, or rather: the best thing to pay with in Cambodia). He was all relaxed and told us to first arrive, unpack, get out money – and he will be waiting for us the next day. And indeed, when we left the hotel the next morning he came running towards us shouting “Mr Andrew! Mr Andrew!”.

Also apart from the tuk-tuk drivers, we just loved Phnom Penh. It is so full of beautiful sights and history – a history which makes you think and which makes you appreciate the nice and seemingly happy people even more.

To get up close with this horrific history you should visit the S21 prison or “Tuol Sleng Museum of Genocidal Crimes”. As we only had little time in Phnom Penh we chose this sight instead of the killing fields which are a bit further a field. And truly: it is shocking! You are walking through this old school building which was transformed into a torture facility, still showing the blood splashes on the wall & ceiling, the old gallows and so many photos of victims. You also read about the seven survivors that were found alive and freed at the end of the Red Khmer regime – and one of this seven was sitting a the end of the tour selling his book. Which is somehow very hard to endure knowing what he has endured…

Also, the Grand Palace is a must-visit and our tip is to go there late in the afternoon. First of all the light is great – and towards the end the other tourists leave and you have the place practically to yourselves. 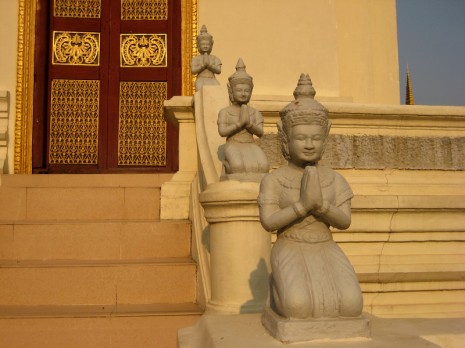 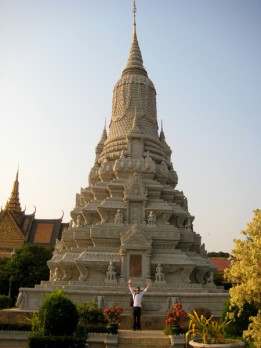 For an aperitif we highly recommend the Foreigns Correspondents Club. It really transports you back to the early 70s or 80s, sitting under the enormous fans on the old leather sofas sipping on your Old Fashioned… and for dinner: on to Friends. The restaurant has been founded by a French guy who wanted to give the street kids in Phnom Penh a future. And to this day it is run as a training restaurant for young chefs and service personnel. The food was awesome (the honey-glazed meat balls are a must).