Admit it: thinking about a holiday in Mallorca, certain images immediately come to mind. Buckets of sangria, burned bodies lying in the midday heat, drunk Germans singing to Jürgen Drews, drunk English singing to Bony M. We were the same – especially since Nicole had been there 15 years ago, doing pretty much exactly that.

However, over the years, people kept telling us that Mallorca has so much more to offer. We heard about hiking, cycling, secluded beaches with glass clear water, lovely countryside with rolling hills, …

So finally we decided to give the island a chance. We picked the first week of September and on top of everything did our first package holiday. Again, not your all-inclusive big hotel bunker type thing – we booked a finca hotel in the mountains via SecretEscapes, and it happened to come with flight and a rental car. But after some busy months at work with new jobs on both our sides, we were really looking forward to an easy, relaxing few days.

And, indeed, this is what we had.

We stayed at the hotel Monnaber Nou near Campanet in the North West of the island: Lovely location amidst rolling hills, an awesome swimming pool, a nice room in the beautiful old manor house, great views all the way over to Alcúdia, good service and yummy food. 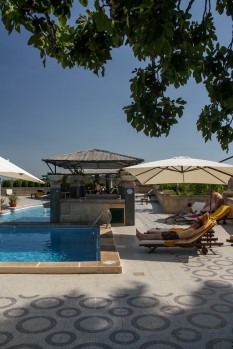 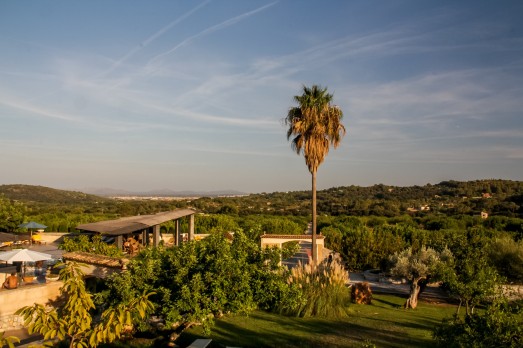 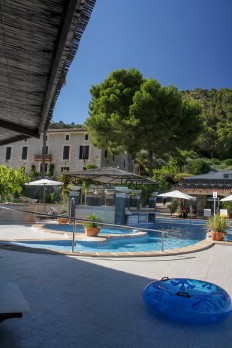 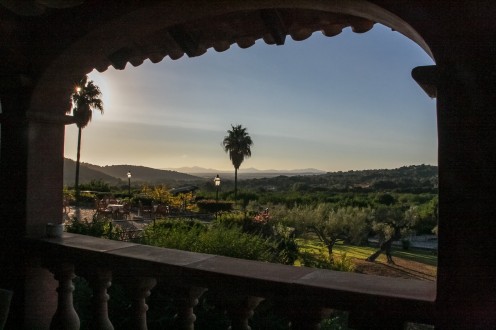 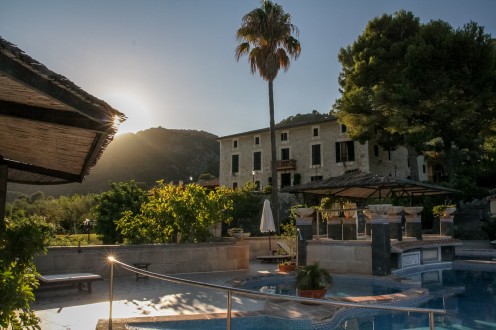 Best of what we did:

We generally like it active and before getting to Mallorca, we were planning hikes in the Tramuntana mountains. However, at 33 degrees celsius, our mood for hiking went to an all-time low. Instead we rented bikes from our hotel and did two tours.

Our Tour started in the rolling hills near our hotel and went through quiet roads towards the main road Ma-2200 to Pollenca. As it was Sunday, the weekly market was on and literally there were bus-loads of people. We squeezed through the masses with our bikes (great idea!) and got some sardines, baguette, nectarines, and plums for our picnic at the beach. The journey continued towards the beach Cala de Sant Vincenc. Just before we got there, we were in awe by the amazingly blue waters of the Mediterranean Sea which were framed by the mountain range of Serra del Cavall Bernat: 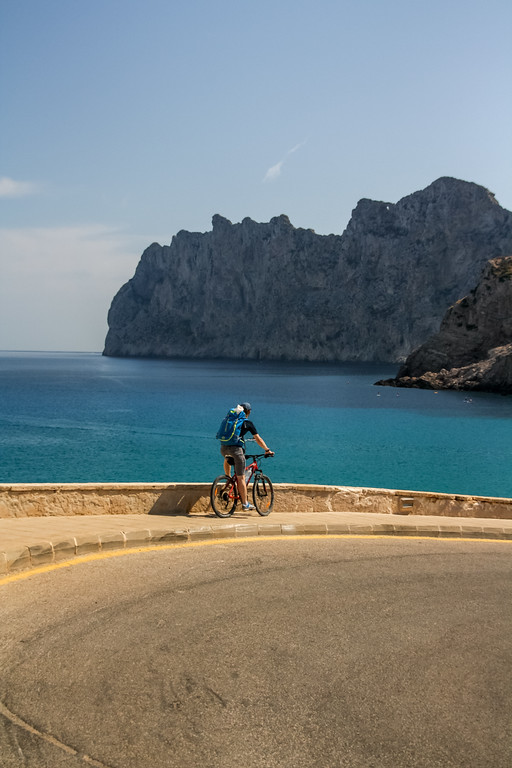 However, when we finally got there, we weren’t the only ones – tourists and locals alike (it was a Sunday after all) where squeezing onto this rather tiny beach. Na well, we were hot, we had food, books and just wanted to dip in the sea and relax. And decided to google “secluded” beaches in the evening.

On the way back, we stopped in Pollenca again – this time it was almost eeringly quiet (4pm on a hot Sunday, guess where everyone was? Well, at the beach we just left 😉 ). We had a cold drink at Placa Mayor and went for a walk up the 365 steps to the calvario from where we had a great view over Pollenca and the peninsula Formentor. 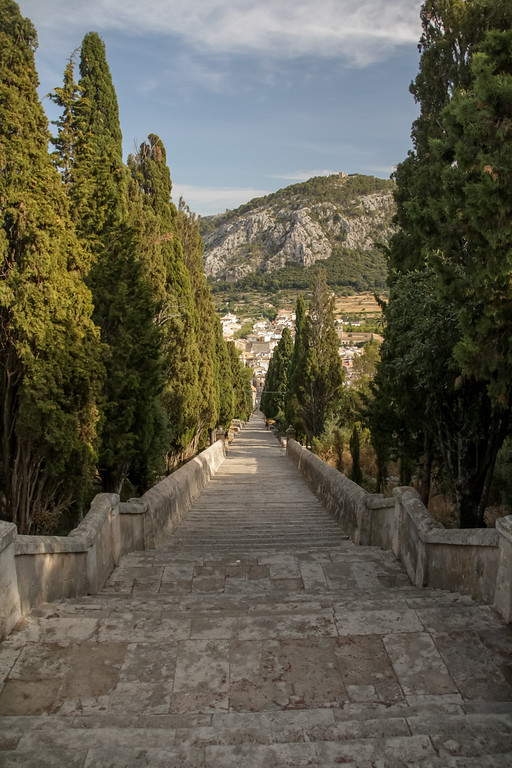 And we did our first food shopping at the little cute store at the beginning of the steps: Sol y Tierra which is offering home-made balsamic vinegar and pesto as well as olive oil and dips produced in Mallorca. Yummy! After a truly Italian dinner in Spain (pizza…) including Sangria and beer, we sat on our bikes again and cycled the remaining 15km home.

Bike Tour 2:
From Campanet via Alcudia to Cala s’Illot (58km)

We had the same start towards the main road Ma-2200 as before, and then – against better judgement and past experienes – really wanted to find this tiny street that the map showed and which would probably save us 3km of the trip. Instead, the whole endeavour probably added 5km (we tried it on the way there and on the way back…). Thus, our advice: forget it. Take the bigger roads, which really look like roads and not just like old donkey passage ways. 😉

Anyway, the tour itself is probably nicer than the first one as it goes through quieter streets and has the nicer views of both the Formentor and Alcudia peninusular. Also, the old town of Alcudia is really worth a visit, with its narrow streets and nice shops.

Onwards and upwards we continued to the beach s’Illot. 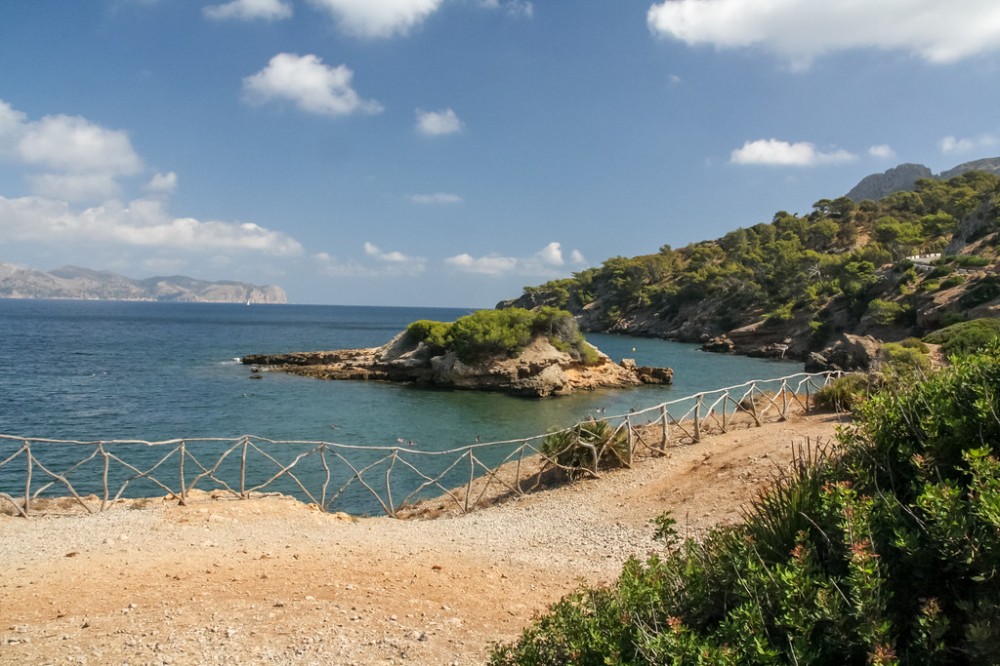 Lovely clear waters, a little island from which you can jump into the sea and a little bar from where you can probably watch a great sunset. It also was rather quiet, until a group of school kids turned up, making a lot of noise.

The road that lines Mallorca from South (St. Elm) to North (Formentor) is one of the must-dos in Mallorca. However, it also comes with buses full of tourists (ignoring the fact that we are tourists as well) which block the tiny hair-pin roads.

We started it from Pollenca, going south with the goal to stop in Sa Calobra. Already before leaving the main road towards Sa Calobra we had the feeling that we wouldn’t be the only ones down there – especially since we were following one of those big tourists buses which drove v e r y slowly.

2/3 down, we decided to take a detour to Cala Tuent. Good decision! 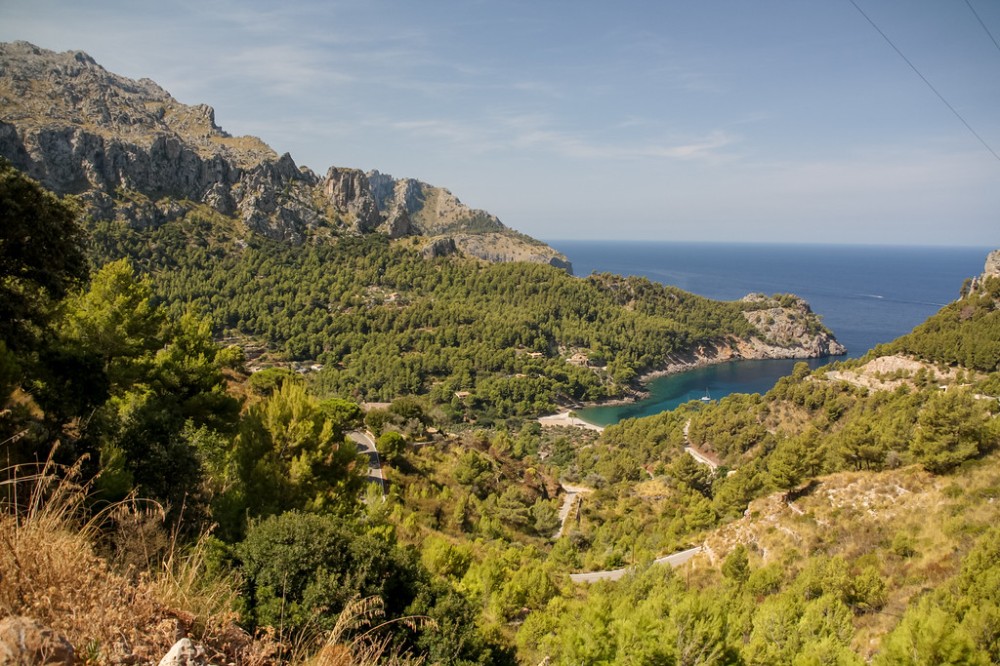 We were really almost by ourselves and enjoyed the clear waters and a bit of shade under a big, slightly wonky tree. 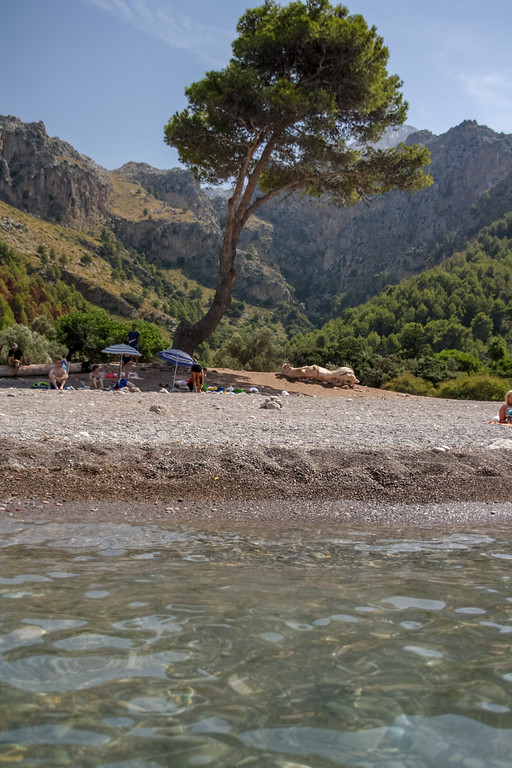 Chilling out there for a few hours, we did dare to continue to Sa Calobra. Which was nice – but truly, so full of people! So after taking a peep, we left towards Sollér. 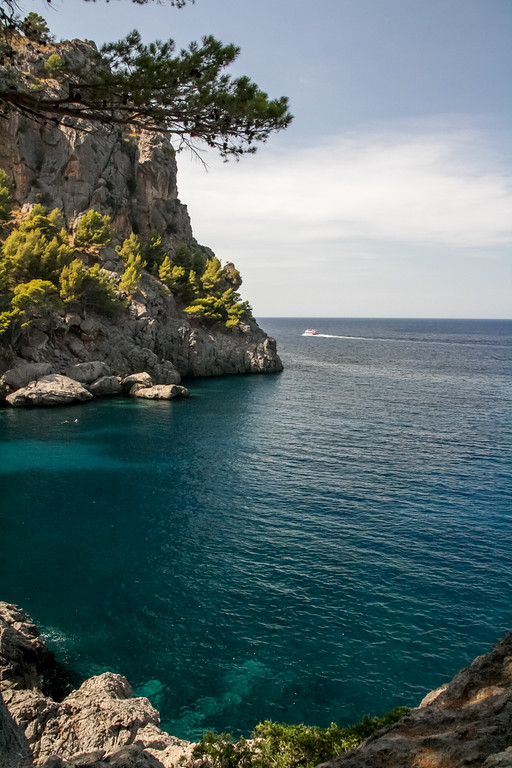 Sollér itself is a lovely little town which a rather busy port by the sea. Still, we booked an motor boat for a few days later and decided to stay for a nice sea-food dinner at El Pirata. 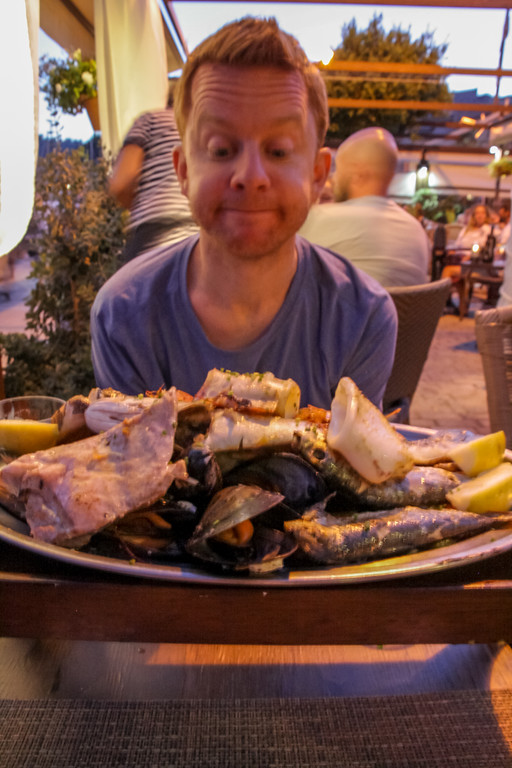 Boat trip: Sollér and around

After two windy days, we were able to board our motor boat at port de Sollér. They give you a map, a cooling bag and snorkelling equipment – we ourselves brought chorizo, jamón, baguette and of course lilo (the new blue inflatable ring – best thing ever to chillax on the water 🙂 ).

We went a bit north up to S’Illeta and south up until Foradada where we had a view of the famous paella restaurant. Anchoring turned out no to be as easy as we had expected. So we spent quite some time looking around for a sandy place to drop our anchor which has a better chance of getting it back out than dropping it in rocky places. We finally found a great spot just off Punta des Dolc, for Andrew to snorkel and for Nicole to lay around in lilo. 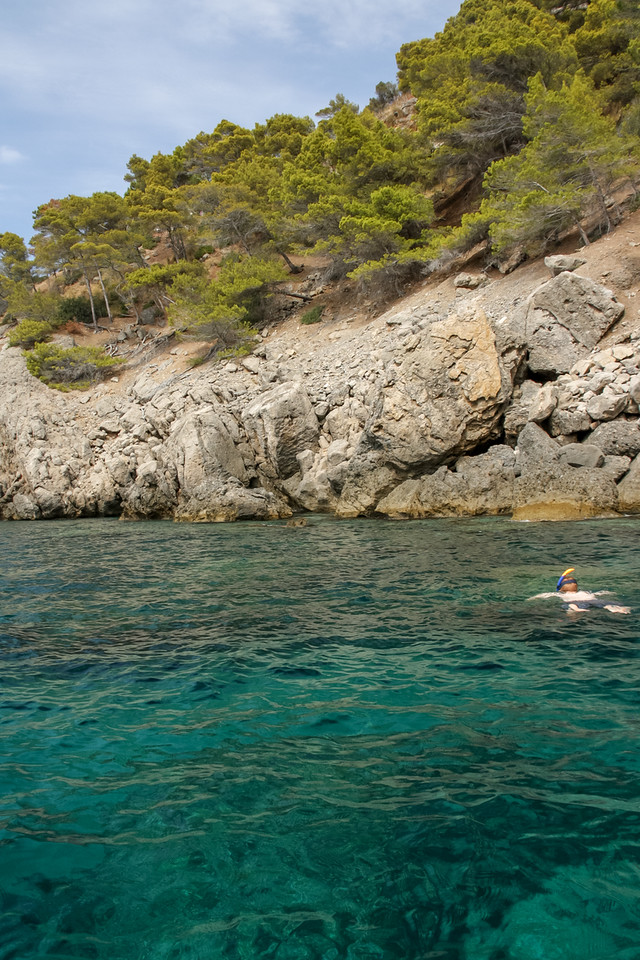 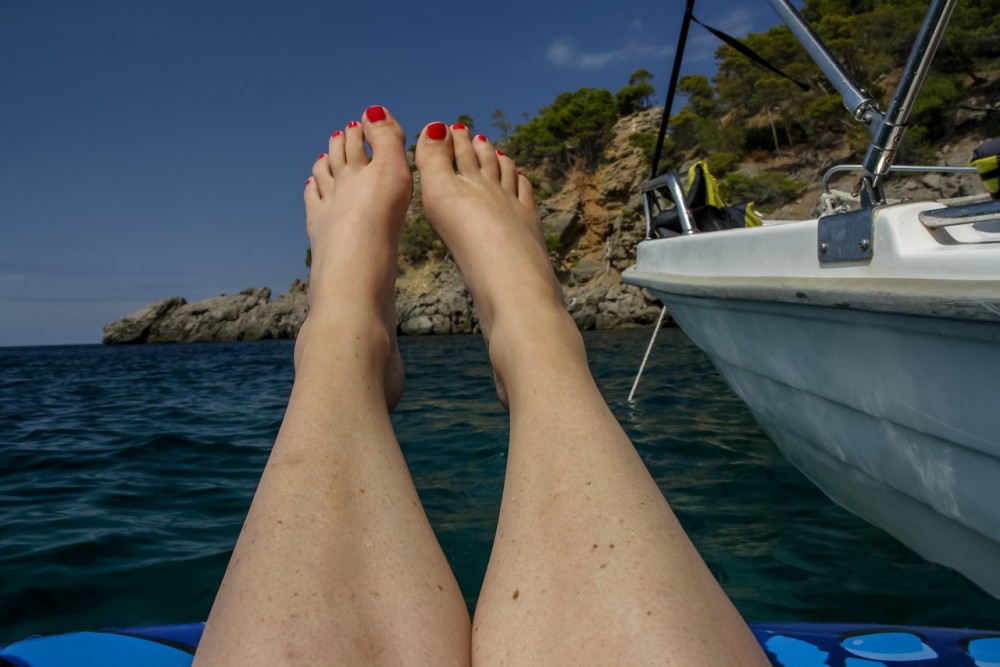 After the first day, we tried our best to pick beaches which weren’t that easy to get to. As humankind tends to be lazy, this is the best bet of not ending up at a beach full of other people.

The best one we found: Cala Murta. It is on the peninsula Formentor – and while everyone else paid 9€ for parking for Cala Formentor, we drove a few meters further towards Cases de Cala Murta and parked for free. A little walk downhill brought us to this: 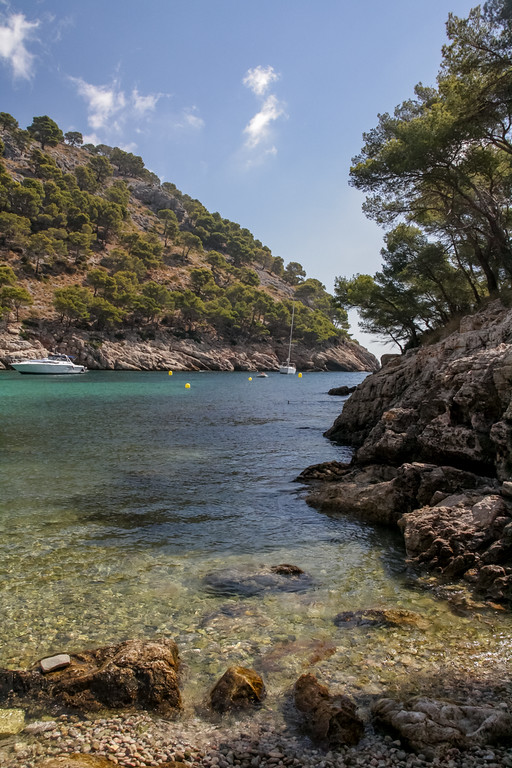 And the best thing: we also found this tiny “hiking” route “Cami es Castellet” which leads to a Mirador with breath-taking views over the Alcudia peninsula.

Our googeling found us this website which has a great list of beaches across Mallorca and other Balearic islands. 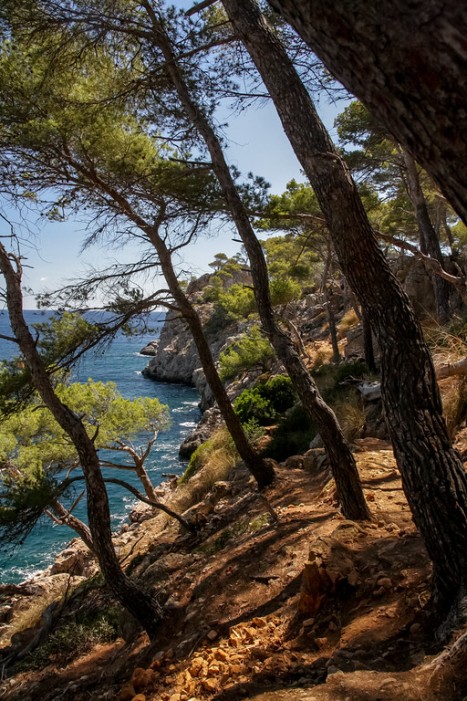 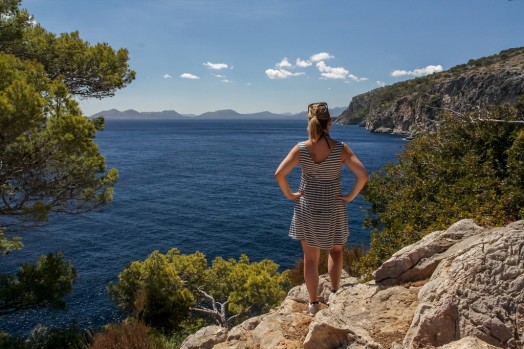 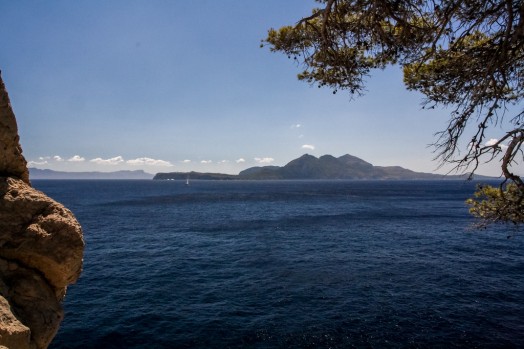 Well, hike is probably too big a word for this little 5km stroll – but the views, the views! 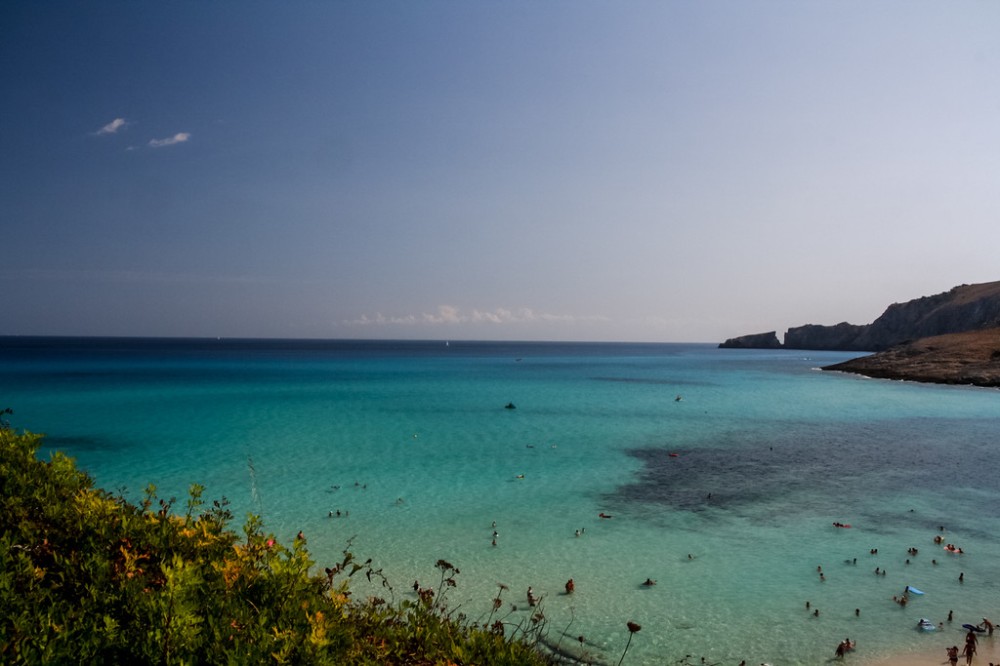 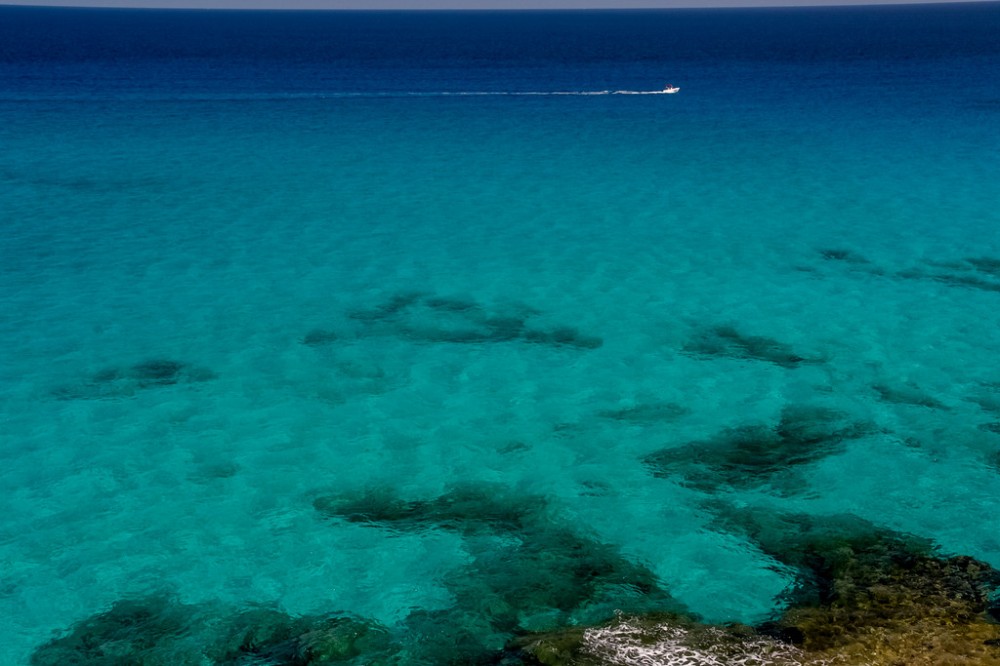 To be fair: the view from the Mirador es Colomer are brilliant, especially still in the morning as it gives the landscape a bit of a mystic feeling. 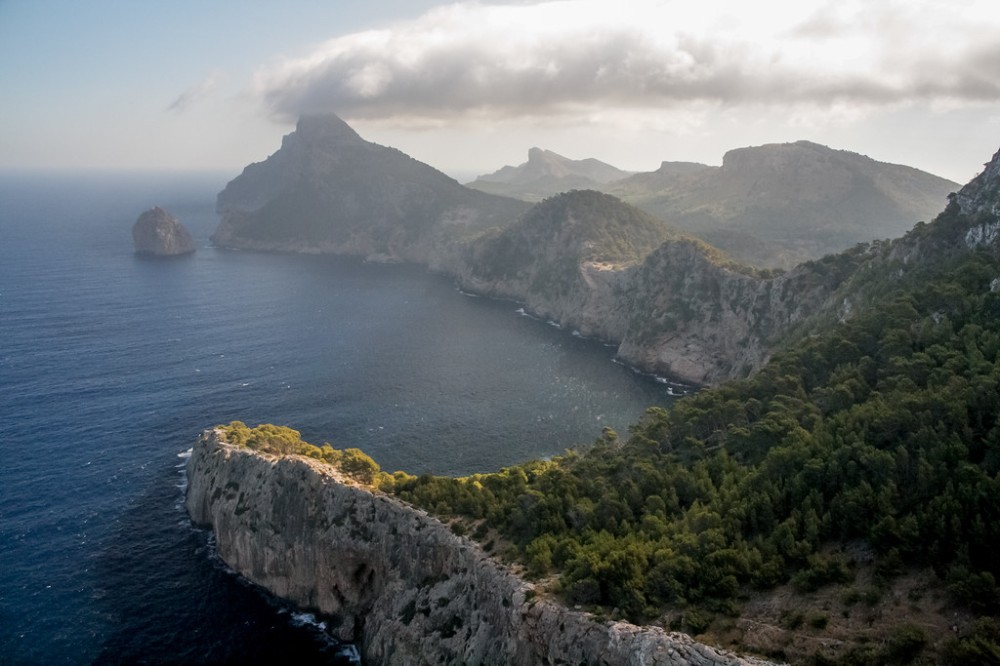 However, for sunset, the much better spot is the lighthouse a further bit up the hill with amazing views over the Serra de Tramuntana. Again, let the photos speak for themselves: 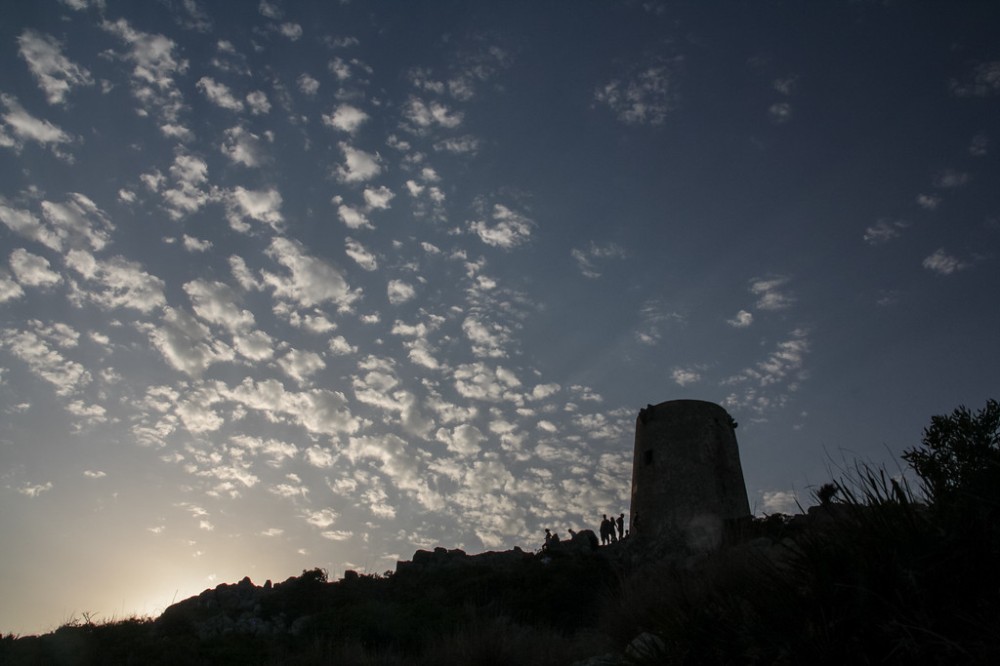 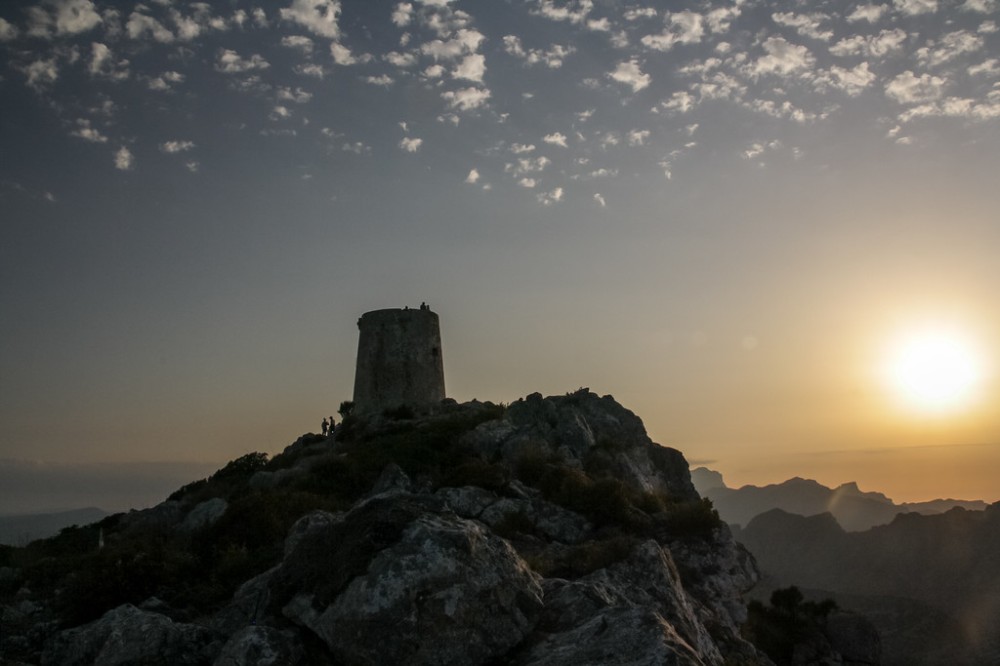 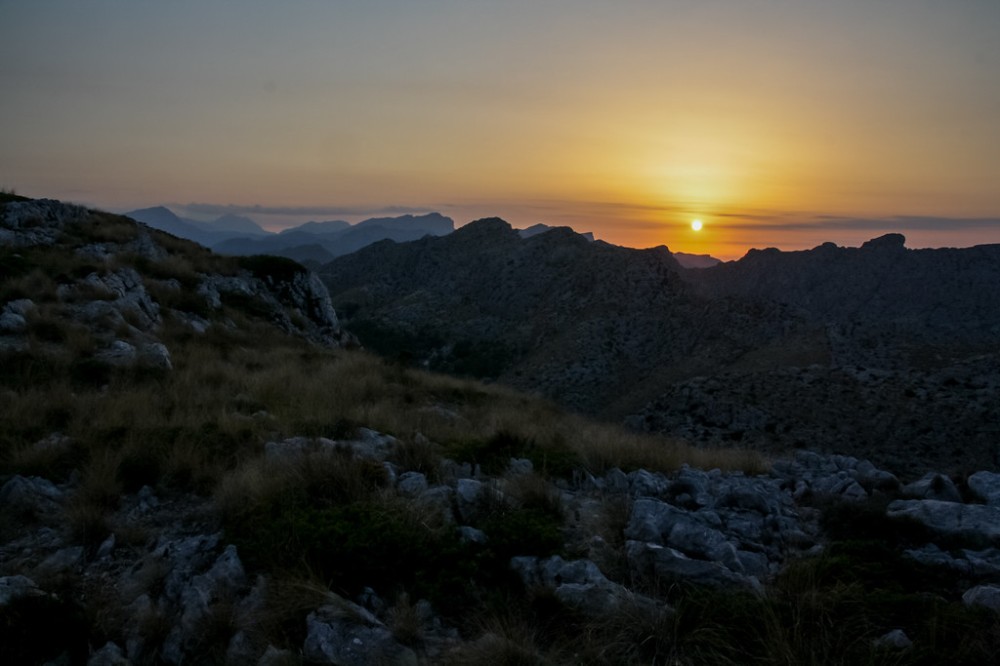 Afterwards a dinner in Port de Pollenca will be in order. We can recommend restaurant STAY within the harbour, the food was too die for and the service amazing. We have never seen a more organized restaurant personell – there was a different person for every single step, from taking the order, to bringing the wine, the amuse bouche, etc. And all within minutes.

We had the Know How Reiseführer “Mallorca” with us – which is in German. Recently, we also tend to mainly work with a map of the area which shows beaches, mountains, hikes, bike routes which you can then google for more information