Just saying it is enough to conjure up images of wild landscapes, snow capped mountains with glaciers winding down to the lakes below, and the weather-beaten end of the world (fin del mundo). And the wonderful thing about Patagonia is that reality is so much better, and wilder! Hiking through Torres del Paine, camping near Mount Fitz Roy in Argentina and walking across at the absolute mind-blowing Perito Moreno glacier in crampons

Our trip began with a 28 hour, 4 flight journey, from Munich to Amsterdam to Santiago de Chile (including an annoying lay-over in Buenos Aires) to Punta Arenas. With some short stopover times, and a tight schedule planned once we arrived, we couldn’t risk losing any bags, so once again, we went with hand luggage only. By cutting our packing list down to the absolut essentials, wearing a great deal of clothes and distributing items wisely between our hiking rucksacks and 2 cotton bags, we managed to stay within limits of KLM’s hand luggage rule. This was true both for weight (<12kg for both items) and size (55 x 35 x 25 cm for the rucksacks) – including all camping equipment such as tent, sleeping bags and mattresses, cameras, binocular and clothing. We were dead impressed with ourselves.

Truth is, in Europe no one checks your hand luggage. Not really anyway. We were however found out by a cardboard box in Santiago – if it fit over your bag you could take it as hand luggage, if not then you had to check it in. Neither of ours fit! But at least this was the last flight, and by checking them at the door of the plane they were pretty much guaranteed to make it to Punta Arenas with us.

If you want to know about our packing list, here it is: Packing List_Patagonia

A rather straight-forward itinerary “down south”

We arrived 14 December at around 7pm having changed our flight with LATAM from Santiago de Chile to Punta Arenas.  We had booked it for 7pm as we were scared that with only landing at 11am it might be tight for the one before which left at 2pm. So we went to the desk half expecting it to be far too expensive to change on such short notice. When the agent mentioned the price of changing fee of 25$ per ticket, we could hardly believe our luck. We actually ended up doing the same thing on the way back. We first tried to call and change the flight via the phone, but the quoted price of 350$ for each ticket made us change our mind very quickly. Instead we went to the airport, found a desk asked to change our flight – and again only paid 25$ per ticket. So big recommendation: if you have a flight with LATAM, only ever change it at airports, it will save you sooo much money!

On 15 December, we went to Unimarc and purchased food for our 5 night / 6 day W-Trek. We did so as we had read that the supermarkets in Punta Arenas are far better stocked and cheaper than in Puerto Natales which we can confirm. 🙂

We also booked the trip to Isla Magdalena and the Magellan penguins in January. Early bird catches the penguin and so on… 🙂

At 2.30 we took the bus to Puerto Natales. We had pre-booked that ticket 3 days in advance from home. Once we arrived, we booked the bus ticket to El Calafate on 24 December. A big recommendation: definitely immediately also book your return-ticket. We wanted to do that but the nonchalant response from the ticket lady made us think “ah, we can get this later”. This repaid on 23 December after we had heard from people on the trek to better book your bus tickets to and from Argentina early, especially over the holiday period. Well, it worked out after a bit of a mad rush around the different coach operators – but we got the second to last two seats on the coach on December 31. Puh!

Activities: We spent the day exploring Puerto Natales & visiting the 3 o’ clock talk at Erratic Rock where we received great information & some tips for the trek, such as:

Additionally we got some great personal advice on our “off-the-beaten-track” campsite Camp Pehoe and that we should definitely have a little “detour” to Mirador Sentero Los Cuernos after arriving with the catamaran from Paine Grande. What a great tip, seeing almost the entire route we hiked the days before in front of us was a nice treat after we had done all that work.

In the evening we then re-organized our bag, leaving everything we didn’t need at the hostel. Nicole also ended up checking the weather in the park ever 10mins or so, getting mentally ready to face 100km/h winds, snow, rain and torrid weather over the next five days.

Talking about weather: the best website for weather in Patagonia is windguru.cz – quite accurate forecasts on wind and rain as well as lots of details on cloud cover, giving you an idea how gray or blue the sky is going to be.  you might want to think about purchasing the pro-version for 2.99$/month for just one month, it gives you more info, more updated weather stats and the opportunity to define custom spots.

Activities: Sleeping! Cleaning – ourselves and our clothes (hallelujah for lavanderías!)! Eating & Chilling. So good after 6 very active days.

Accommodation: Shenu Patagonia: fantastic little cabins with really nice interior – good location, 5-10min walk to town – the owner is just fabulous, she even brought us home-baked cake on Januar 1 as everything was closed that day

Activities: Tour to Isla Magdalena to see the Magellan Penguins

We had booked the trip when we arrived in Punta Arenas via the Laguna Azul travel agency next to Place del Armas. It turned out that it would have been slightly cheaper to go directly with the tour company “Solo Expeditiones”, but at least we got picked up at our hotel..  And we were really lucky! We had heard from various people during the trip that their penguin tour got cancelled because of the strong winds so we were crossing our fingers that the wind would not act up. A hope which in Patagonia is a bit like hoping for a 20 degrees at Christmas in Munich. Can happen, but not very likely. And what did we get? The most beautiful, sunny and (wait for it!)  w i n d f  r e e  day.

So we enjoyed the boat-trip to Isla Magdalena on deck sitting in the sun and watching the waves. 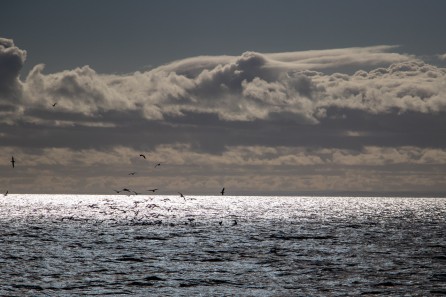 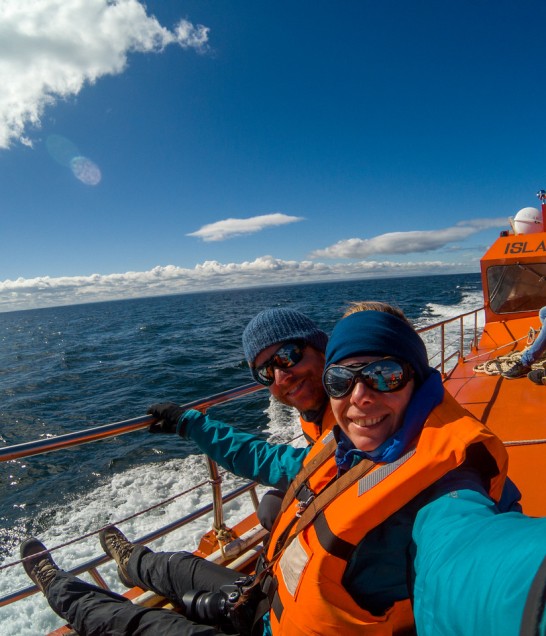 And then Isla Magdalen came into view, and with it 50.000 penguins, how cool is that?

And on the island, what can I say? So many of those cute and fluffy little friends. We got a bit of an introduction before: not to touch the penguins, to keep 1m away from them, not obstruct their path etc. Things that should be common sense, but I guess a few fellow humans might miss that “sense”… 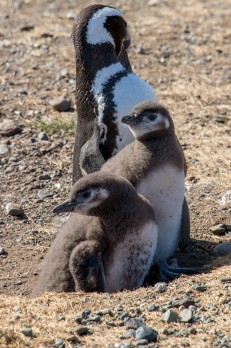 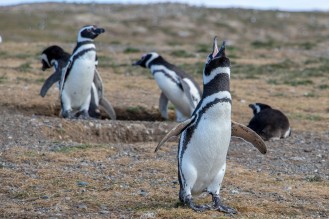 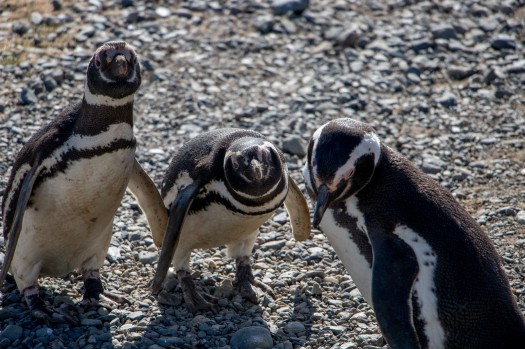 A cheeky little one coming quite close

The next stop was an island full of sea lions, some of then very, very, very big – with a tendency to fight each other.: 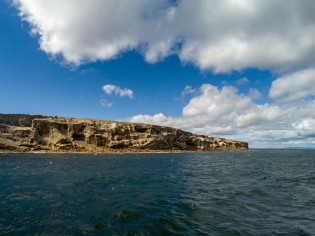 After that we headed back to Punta Arenas, where had lunch and coffee until it was time to catch our flight to Santiago.

03 January:
Quick stop-over in the heat in Santiago de Chile

34 degrees! Sunshine! No wind! A hotel with a swimming pool!

We loved Patagonia so much – but still we were really looking forward to having one day of summer at the end of our trip. We enjoyed the street art, had good food and went up to “Cerro San Cristobal” where you have great views over the city and towards the Andes. 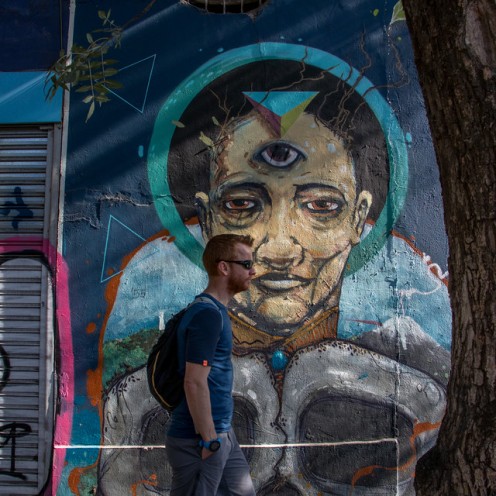 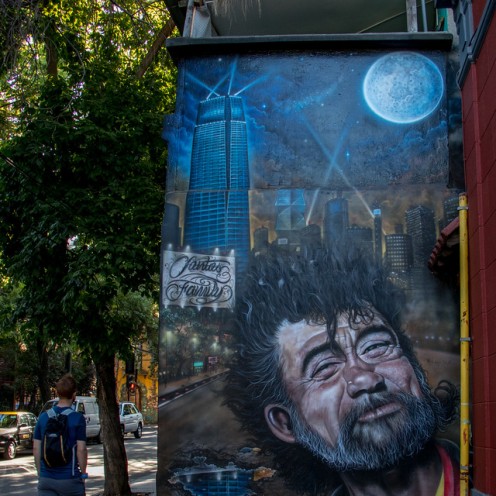 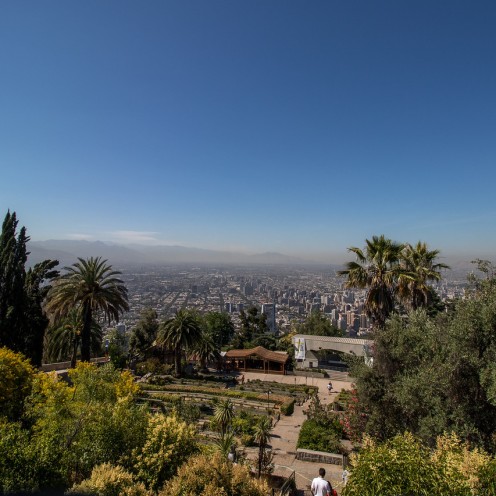 We actually also had a trip to the local Banana Republic and H&M store to pick an evening outfit to look representable on the rooftop bar “Acatea Mathilda” that planned on visiting. So this was the perfect end of a great trip.

Before we got home though, we had a few hours to kill in Amsterdam. And what do you do after a three-and-a-bit-week trip and 24hr flight? Exactly, you head into Amsterdam for breakfast and a little stroll. 🙂 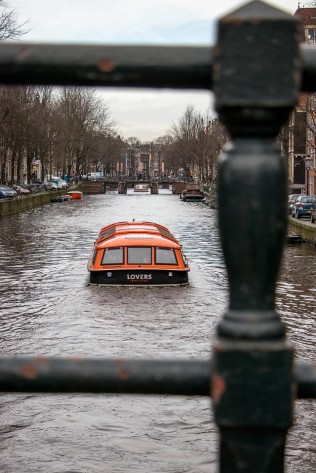